After having a bit of a break from travelling to see basketball (not entirely through choice more as a result of other demands on my time), today I went to my first road game of 2020.

The London Lions were playing against the Sheffield Sharks at Ponds Forge. Sheffield is a relatively easy drive up from London so we decided to drive up the night before the game which allowed us to go walking in the Peak District before the game.

Ponds Forge has a large car park attached and is easily accessed if you come up by train (as a couple of our group did). We didn’t actually use the venue car park as we had parked in town to go for lunch and decided to walk the 15 mins venue rather than move the car.

The venue is nutlike function but the Sheffield Sharks logo is painted on the door that leads to the court. Once through the door there is a stall for ticket sales, a merchandise stall and some volunteers scanning tickets.

At Sheffield the seats are all on one side of the court. I think this layout works in smaller venues as trying to spread the crowd out on different sides of the court can affect the atmosphere as it is difficult for the crowd to create the same level of noise.

The seats at Ponds Forge all have backs, always a plus. They are hard plastic so not the most comfortable but that’s typical in BBL venues.

At every time out and quarter break the Sharks had some entertainment lined up. This appeared to be children from a local dance troupe. As we were siting behind the Lions bench my view was usually blocked by basketball players but the crowd seemed to enjoy it.

I would have preferred a bit less music during the game but I know not everyone agrees with me on that.

Overall I liked this venue and found it easy to get to (and get home from). 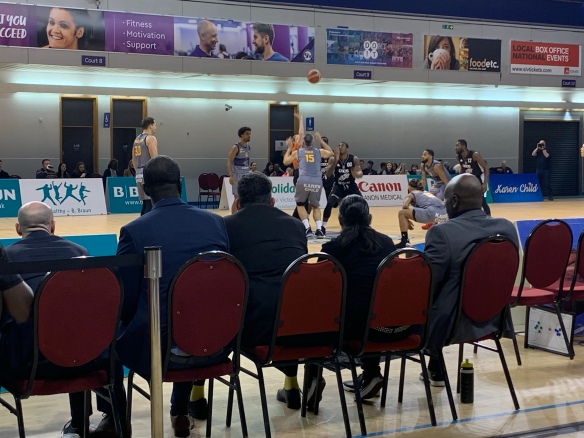