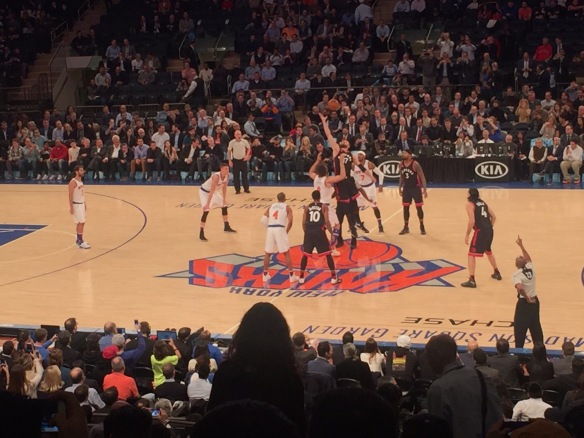 The fourth game with Kurt Rambis in charge. Going in to the game he has 2 losses to 1 win (and the win came away from home). This was always going to be a tough game as the Raptors are doing well at the moment.

The Raptors took an early lead in q1 but the Knicks managed to keep the pressure on and ended up finishing the period up by 2 points. In the second quarter they again lacked energy and focus and managed to end the half down by 13 points.

Some of the players were having good individual games (Lopez and Melo) but others were not having good games and were making silly fouls.

The Knicks today signed Jimmer Fredette to a 10 day contract. This guy is known for his scoring (he scored 35 points during the D-league All Star game) and there was a lot of expectation that he would get bug minutes to help the team. Chants of ‘we want Jimmer’ kept breaking out throughout the crowd. The fans were not rewarded in q3, and the quarter finished with the Knicks down by 18. Looking at the stats at that point it was clear that the Knicks were simply being outplayed.

Free throws were a problem for the team tonight, especially Melo who did not seem to have the touch from the line.

Credit has to be given to the crowd at MSG who stayed behind the crowd and kept defence chants going even in the 4th when even the most optimistic fans must surely have given up hope.

The post game interviews were telling as Melo and Lopez were visibly upset by the result and whatever had happened in the locker room post game.