Last week I went to Charleroi to see Spirou take on the Giants.

I have to say that the venue was much quieter than I expected it to be, in terms of number of people. It was however nice and loud in terms of volume. The home fans have create a great atmosphere. 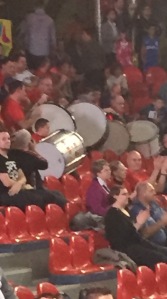 I am was pleased by the limited commentary and music during the game. It allowed the fans, home and away, to make a lot of noise to support the teams.

Antwerp were clear winners of q1, with a five point lead. Charleroi came back in q2 to go into the half with a 2 point lead. The lead flipped again by the end of q3 and finally switched again to end with a win from Charleroi.

It was a good game in that it was not easy to predict who would win. There were some sloppy mistakes made by both teams. It was not one of the more memorable games I have been to – there were few stand out moments. There was one buzzer beating three (to beat the shot-clock).

The venue is easily accessible by car and there was plenty of nearby parking.

The venue was a good size and there was plenty of sign posting to help you find your section.

A range of food and drink was available. This was all at one point, which was adjacent to the entrance. This did cause some access issues. Available food included sandwiches, waffles, hot dogs, sweets and waffles. Standard soft drinks, wine and a range of Belgian beers were also available.